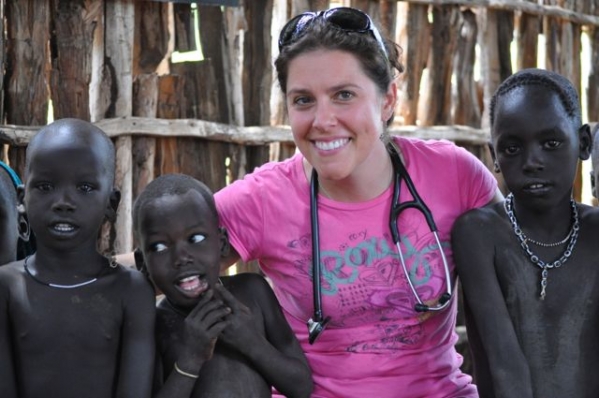 Last week I (Allyson) was asked to accompany a missionary by helicopter to some remote people groups in order to provide a medical clinic while he did teaching. In God’s providence, the 3 days that I was needed actually worked out to be a time that I was able to slip away from Langano! I returned Saturday from the experience of a lifetime. What a BLESSING to get to receive this gift as we are leaving Ethiopia. A huge thank you to Ben, Marcus, and Matthias for including me in your work! Thanks also to Dave for supplying all the meds I needed. What an honor to work alongside these godly men. Our team left from Awassa early Thursday morning and went to Southern Ethiopia to visit the T’ara tribe in two different locations. The T’ara people have some Christians among them after being reached with the gospel about 20 years ago by an Ethiopian evangelist who walked 10 days to find them! When this evangelist, Ato Bekele, arrived for the first time, the local with doctor refused to let him preach. Ato Bekele began praying that God would open the door for him to share the gospel and lightening literally dropped down out of the sky and struck the witch doctor dead right in front of everyone. That wasn’t necessarily the “open door” Ato Bekele was expecting, but he was definitely able to share the gospel after that – no one was brave enough to stop him! That spot is now the place where the T’ara church is built. I was able to meet the very first T’ara Christian who is now in his mid-forties. The T’ara are hungry to learn more about God and the gospel as they are extremely isolated in the highlands of Ethiopia. Ben, the missionary who I went with, is putting their language into written form by compiling chronological Bible teachings (in small story books). This way, they are learning how to read at the same time that they are learning about God. Ben’s philosophy is, “It is easier to teach someone who has a heart for God to read than it is to teach someone who can read to have a heart for God.” These people were HUNGRY for God’s word. I have never seen anything like it – so much that we take for granted! At the first location (Oshka) I provided a 2 hour clinic in the morning and another 2 hour clinic in the afternoon while Ben taught and met with the local believers. It was amazing to see how the medical work and the Bible teaching complement each other so well. Ben would use the clinic as an example during his teaching, “If Allyson examined you and diagnosed your illness, and then gave you the exact right medicine to treat your condition, would you get better just by putting the medicine in your pocket?” The crowd would answer no. Then, Ben would explain, “No, the medicine does you no good in your pocket – you have to swallow it, and take it in – then you can be healed. It’s the same with Jesus. You can listen to the stories I tell you about Jesus, but in order to be healed from your ‘sickness’ (sin), you have to swallow it yourself.”
After that, we left by helicopter to the next location (Agara). These people were also from the T’ara tribe, but in a very isolated location about 15 minutes away by helicopter. In Agara, Ben started with some teaching for about 200 people under a mango tree. He is on story 5 of about 80 stories in the whole chronological teaching series. After the teaching time, I provided a clinic for about 3 hours and then, after dinner, Ben taught again late into the night accompanied by the sound of beating drums and chanting voices outside.
I slept in the helicopter for the night overlooking the most beautiful display of God’s creation – majestic mountain ranges like I have never seen before! Before going to “bed”, I asked one of the T’ara people what kinds of animals they had there. How encouraging to hear they had lions, leopards, etc. – ha! I was praying my heart out that I wouldn’t have to get up in the night to go to the bathroom! (My prayer was not answered…)
Friday morning I did another small clinic (about 20 people) while Ben finished up. I was able to provide some follow-up care for a few very sick babies that I had seen the day before. I am positive these babies would not have lived without medical intervention. In fact, I am not sure if they will even live after receiving medical care, but I think they do have a fairly good chance after receiving the needed medication. We prayed over each of these babies, and even the fervent way the T’ara people prayed was convicting. I feel like so often I pray out of routine and they seemed to be having a direct, passionate conversation with the Lord as we were begging him to heal these children. I love how the body of Christ can be so mutually encouraging to each other! After loading up the helicopter, we traveled on to Bbodi territory to a place called Gia. This was a quick stop where Ben needed to meet with a few of the Bbodi believers. These believers are anxious to have 2 Me’en (another tribe) evangelists come live with them and disciple them. Ben is helping to coordinate this and the Bbodi have agreed to build the evangelists homes and to provide food for them. Both T’ara locations are also eagerly anticipating receiving Me’en evangelists. The 6 evangelists should be moving in to all 3 locations (T’ara/Oshka, T’ara/Agara, Bbodi/Gia) next month. I didn’t do an official clinic during our time with the Bbodi, but I was able to treat a few patients out of the cargo area of the helicopter. The Bbodi people were HUGE! I was really surprised to see almost all of them towering over me (don’t laugh – I know most people are taller than me, but these people seriously TOWERED!). I learned that the Bbodi compete each year to see who can become the fattest. The men work hard to drink as much blood and milk so they can be counted among the largest in their tribe. The Bbodi are known as one of the fiercest tribes in Ethiopia. They are pastoralists who have a strong history of fighting with and killing their neighbors. The place we landed had a little pocket of Bbodi believers who seemed so peaceful. It was hard to believe that their tribe is known for being such strong warriors… although they did look a bit intimidating between their size and their attire… or lack of. The last stop on our journey was to the Kwego tribe in Yiddi. These were by far the most remote and unreached people we visited. Ben and his team had only just found these Yiddi Kwego for the first time a few months ago.  In fact, it was a bit difficult to even find them from above. We had to fly much lower and look for signs of civilization. Finally, Marcus (one of the pilots) saw smoke from a small fire, so we circled for a few minutes to find a place to land and eventually landed on the bank of a river. For a few minutes we were alone, but two by two, the Kwego people started appearing out of the bush. The Kwego are a very small tribe who speak Me’en (the language Ben speaks), so he was able to communicate with them. They live mostly off of fish from the river. The Kwego seemed skittish of us most of the time and weren’t sure if we could be trusted. Just when I thought they were becoming comfortable around us, something I did, or some move I made would make them jump and then scatter. Ben talked to them for a while before we started setting up to do clinic. They had a few questions for Ben and seemed a bit antagonistic (although everyone that had been there before thought that this was an improvement from the last time). In fact, while Ben shared with them in his awesome bellowing voice, the Kwego sat there sharpening their machetes and cleaning their guns – quite a sight! Ben offered to pray for them at the end and they strongly refused.  After the teaching time, I started the clinic where I treated lots of derm, bone infections, and basic aches and pains. Once we had treated the majority of them and provided worm medicine for the rest, we packed up and headed out. Slowly, a foundation of trust is being laid with the Kwego. Ben and his team will continue to visit them and share the chronological teaching with them. Please pray for the Kwego as they will soon be presented with the gospel for the very first time EVER