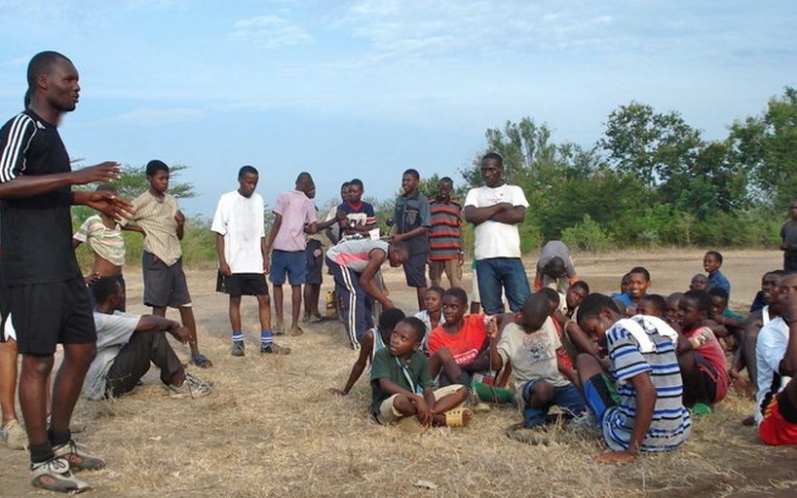 Living in an area opposed to the gospel, Charles was zealous to see the youth in his community transformed. These young people face many challenges such as drug use, child labor, early marriages and teen pregnancy. Charles fervently prayed that they would come to know Jesus. While he had a heart and a passion for the youth in his community, Charles wasn’t sure how to reach them.

Charles was invited to attend a Sports Friends Basic Training in 2012. The training helped him understand how to build relationships with youth through sports. After the training, Charles returned to his church and began a volleyball team as a tool to disciple the youth in his church. “Coach” Charles also started a soccer team as an outreach to the community. Immediately, Charles met resistance from the families in the community. Still he endured.

Facing much opposition, Charles continued to trust that the Lord would transform the lives of the youth.  One day, after he finished training the boys, Charles ended the session with a time of prayer. An adult was watching and reported back to the village what Coach Charles was doing. Charles was ordered to stop his Christian activities immediately. But nothing could stop him from loving his “kids.”

Then things changed. Charles was visiting with some players from his team one day when a motorcycle came flying through the small town. The driver ran over a small child and killed him right in front of Charles and his group.  Immediately, the people in the town began picking up rocks and sticks with intent to kill the driver. Charles recognized the man as a parent of one of his players and jumped up to defend him. Charles told the crowd that he knew the man and asked the crowd to show the driver mercy. Crouched on the ground, this man who had been adamantly against Charles’ ministry raised his head to see who was protecting him. He was shocked. Knowing his life had been spared, the man looked Charles in the eye and announced, “from today you have my support.”

The next time that Charles went to the field to coach his team, the man on the motorcycle was waiting for him with two soccer balls! The man told the youth on the team, “you have a good coach so you should listen and obey him.” Eager to know why this man had suddenly changed his attitude toward Coach Charles, the team listened intently as he shared the story and explained the gospel to them. Afterwards, one of the players told Coach Charles he wanted to become a Christian. Three more followed.

Today, Charles works with 52 youth from his village and disciples each of the new believers. The man on the motorcycle protects Charles and the Christian players from persecution within the community.

This is just one story of how God is using the ministry of Sports Friends to impact communities for Him! This is made possible because YOU have invested in what God is doing here. Thank you for your prayers and support!

Please pray for the following:
April 21-25: Pray that the Lord will work in the lives of the 150  youth attending Sports Friends camp this week.
April 28-30: Pray for the 20 indigenous Kenyan missionaries who will be trained to use sports as tool to reach youth in very challenging areas.